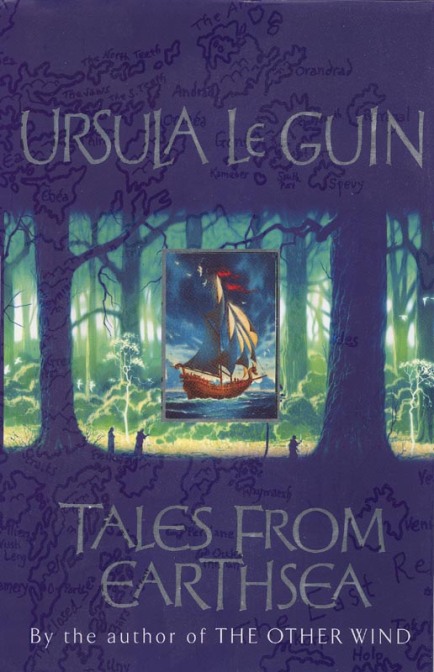 This is going to be a difficult book to review, in part because this is the first time I’ve tried to review a collection of short stories. Some are novella length while others are short stories. Of the stories in the collection there are five in total. The first novella length story, The Finder follows the story of how the school of magic is established on Roke Island. Darkrose and Diamond revolves around the romance of a young couple, the daughter of a witch and the son of a rich merchant. The Bones of the Earth follows Ogion the Silent as he deals with an earthquake. On the High Marsh focuses on a healer arrives in a remote village where there is a livestock epidemic. Lastly is the second novella length story Dragonfly, which acts a postscript of sorts to Tehanu and follows the girl Dragonfly as she seeks to become a wizard despite the wizarding schools only taking male students and thus follows her attempts to shatter the gender barriers prevalent within the school in the process.

The Finder was normal enough, a simple story detailing how events lead to the creation of the school on Roke Island. Given the institution’s role in A Wizard of Earthsea I found it interesting to see how the school originally developed. The use of gender roles and establishing that women played a key role in the school’s founding was a clever way of redressing the gender imbalance from the previous Earthsea novels, where women could only ever be witches as opposed to mages. The fact that these women were later excluded from the school made me feel sorry for him and I liked the novella in part because of how it addressed the issues present within the previous novels in the Earthsea series and challenging notions which were previously not discussed.

On the High Marsh was somewhat of an odd sheep and for some reason I didn’t follow it in quite the same way as the others, in part because I did not see any connections to the rest of the series and partially because somehow I found the plot somehow unremarkable. Consequently it wasn’t always the easiest story to follow and I must confess I sort of skimmed through it. The only connection to the series is when Ged appears towards the end of the story, revealing that the book was set during his time as Archmage. Truth be told, it just seemed like a weak story.

Another intriguing story was Dragonfly, which acts as a bridge between Tehanu and the next Earthsea novel, The Other Wind. It follows a girl, the titular Dragonfly. The interesting aspect about this is that once again it deals with the idea of independence and the challenging of gender roles, this time more explicitly since the main character seeks to become a mage despite being a girl and seeking to study at a school which only admits male students. The return to the school on Roke was quite welcome and showing the internal corruption amongst the mages was interesting after losing Ged as Archmage and the question is left as to who will become Archmage next.

Overall the theme of independence and feminism features strongly in a lot of the stories in the book, more so than in the previous Earthsea novels. A lot the stories challenge the idea that the way things are in the Earthsea novels are how they should be, rather she makes the reader stop and think about whether this whimsical world of hers as as perfect as she’s made it out to be. In some ways I thoroughly enjoyed a lot of these stories, not as much at the Earthsea novels themselves but still a great read.

IN A WORD: INDEPENDENT